The island of Manhattan is certainly in no short supply of incredible penthouses, but here’s one that proves not all are created equal. 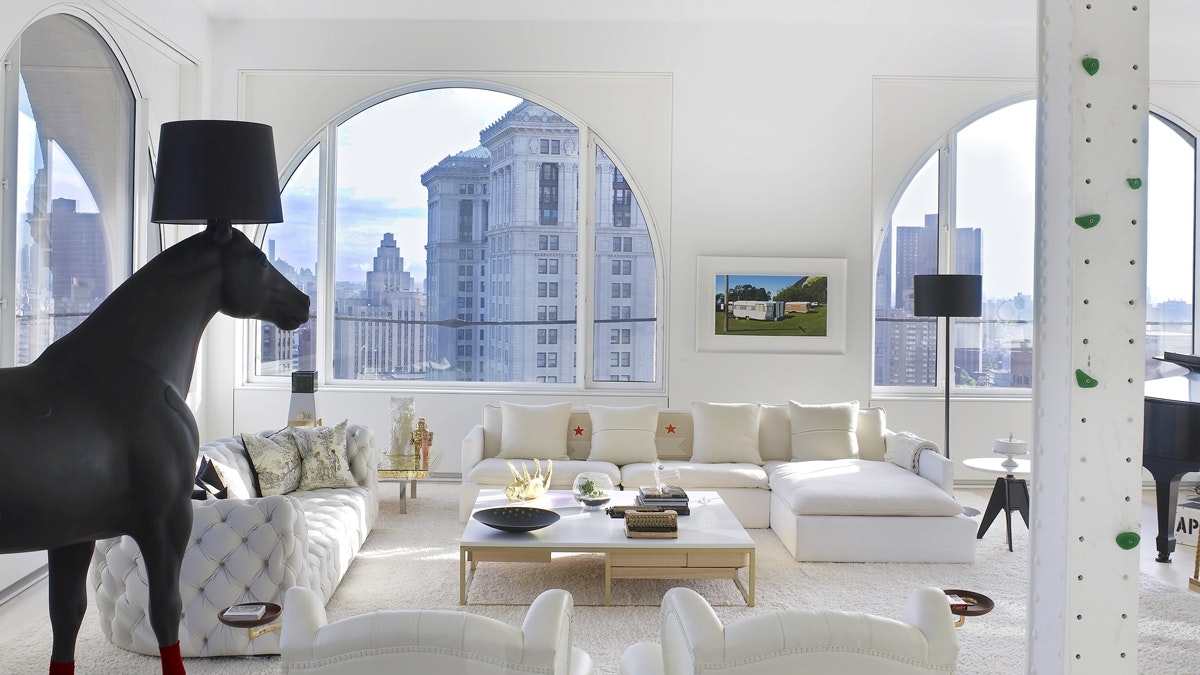 Set atop a once vacant four-storey penthouse in one of New York’s earliest steel frame buildings, the Sky House beautifully blends contemporary living with artful whimsy across its’ 6,600 square-foot of raw space. Built in 1895, the skyscraper which was originally designed to be the headquarters of the American Tract Society has more recently been converted into condos, aside from its’ top four levels which remained unoccupied until now. With architect David Hotson and interior designer Ghislaine Viñas seeing the potential this extraordinary space presented, a match was made in architectural heaven and their brainchild, the Sky House was born. 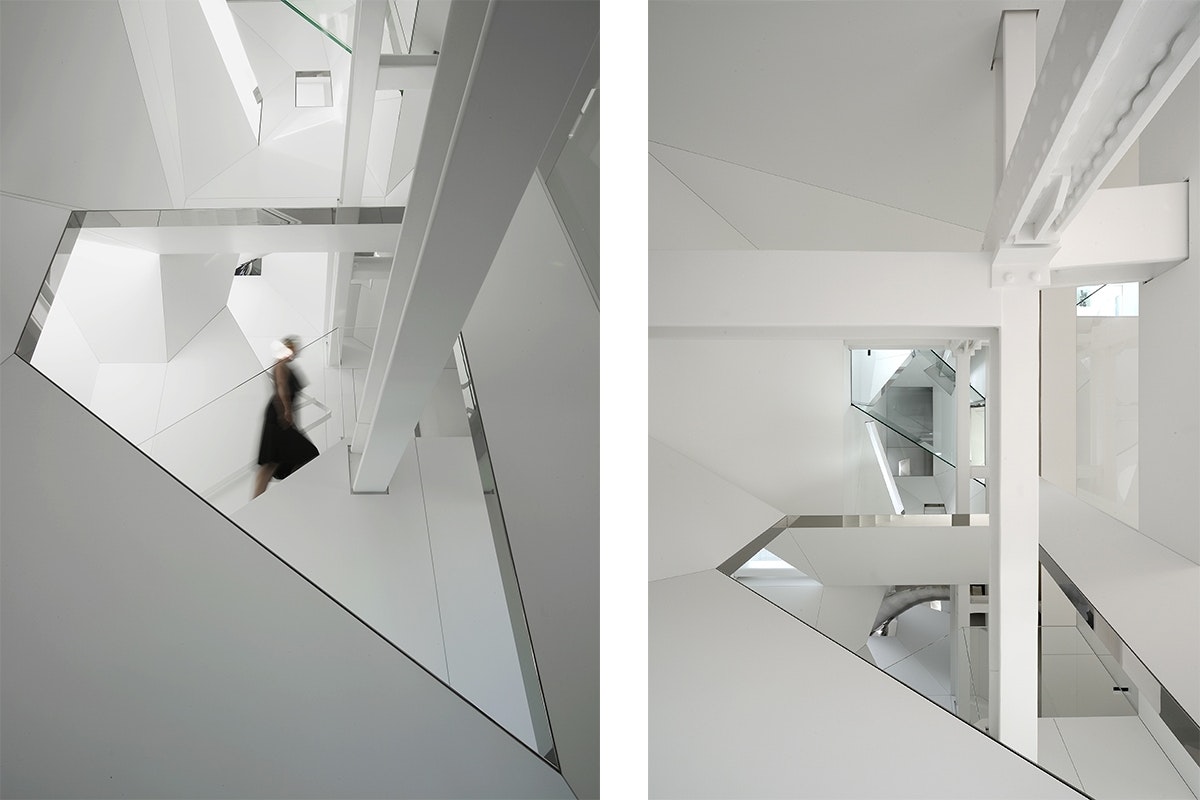 Upon entering the multi-level mega apartment, visitors arrive at the private elevator landing where a quick glance up allows them to ogle at the glass-floored attic above, sitting pretty at four-storeys high. Continuing along, the entryway spans toward a faceted stairwell, with links to structural glass bridges naturally illuminated with borrowed light from the rooms above. The main living quarters occupies the north end of the penthouse and has been restructured to open up its’ 50-foot (15-metre) high ceiling, making use of a central steel column which acts as a climbing pole, peppered with finger and foot holds for those bold enough to make the ascent to the other the levels, including its top level attic if they so dare. Viñas brings her signature lighthearted-yet-playful style and love of colour to the meticulously designed dwelling which you can see dramatically throughout this mostly-white apartment. Standouts of her vision include an oversized and ridiculously comfy-looking reading nest (which looks like the aftermath of a floral explosion but in a good way), vibrant decor choices which seem to be heavily influenced by pop culture and a carefully crafted selection of over the top yet astonishingly chic furnishing choices - it all just seems to be so fitting given the space it encompasses. 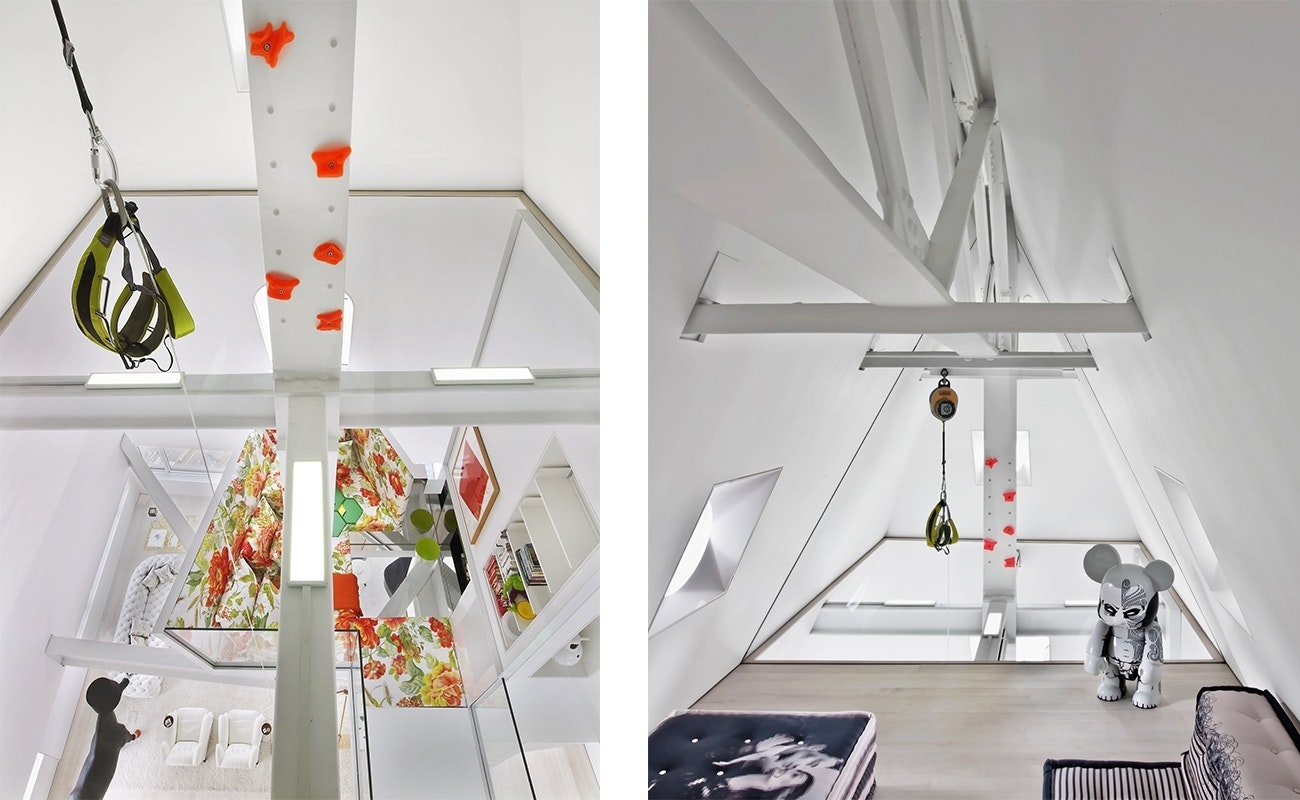 Every detail has been well thought out, from the steel arched windows with views that look out to some of the cities most iconic buildings and bridges, to the lesser known peepholes, like a secret window in the guest bathroom offering a private glimpse of the Chrysler building far off in the distance. Hotson explains "What emerged as we developed the design was very much a desire to exploit the fact that we're sitting on top of a skyscraper in Manhattan with extraordinary views in every direction", and it’s clear they have achieved just that. The building’s steel structure has also been put on show with its exposed beams and columns weaved throughout the rooms, paying homage to the building’s history whilst adding to the overall theme of the penthouse. Along with this, there are so many hidden gems to uncover, including a glass desk built into the central bedroom, in case you need a snapshot of what’s going on downstairs. 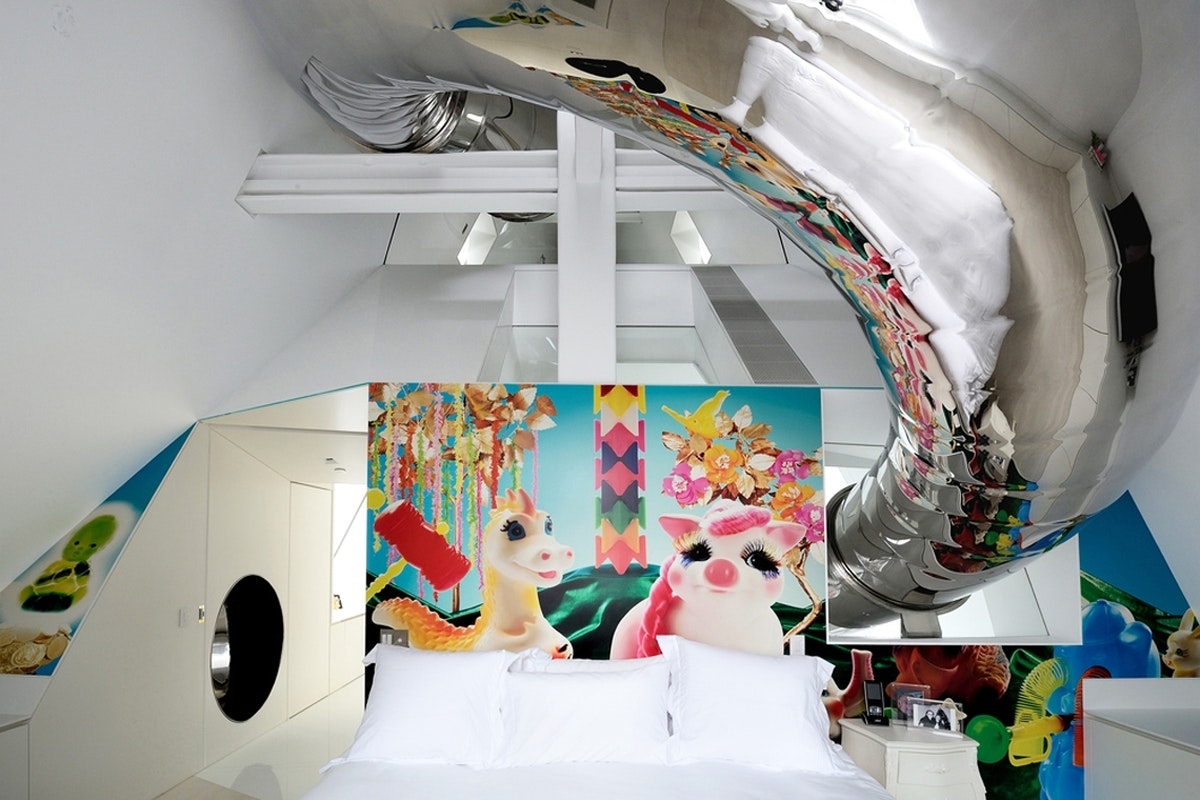 But it’s the south-ended centrepiece of the Sky Home that truly sets this penthouse apart, an 80-foot (24-metre) mirror-polished stainless steel slide that whirls its way through all four floors, which truly turns this designer dwelling into a wonderland for the young at heart. Linking the attic to the floors beneath, the epic two-stage slide allows domestic thrill seekers a fun way to travel down to the level below, where they can stop to access rooms or continue on to the second phase of the slide, making their way down three more levels before reaching the ground floor. Constructed in Germany, the giant tubular slide cuts through several rooms and interior windows, dangling ride enthusiasts above stairs, and even wrapping itself around a column before coming to an end at the entrance gallery. 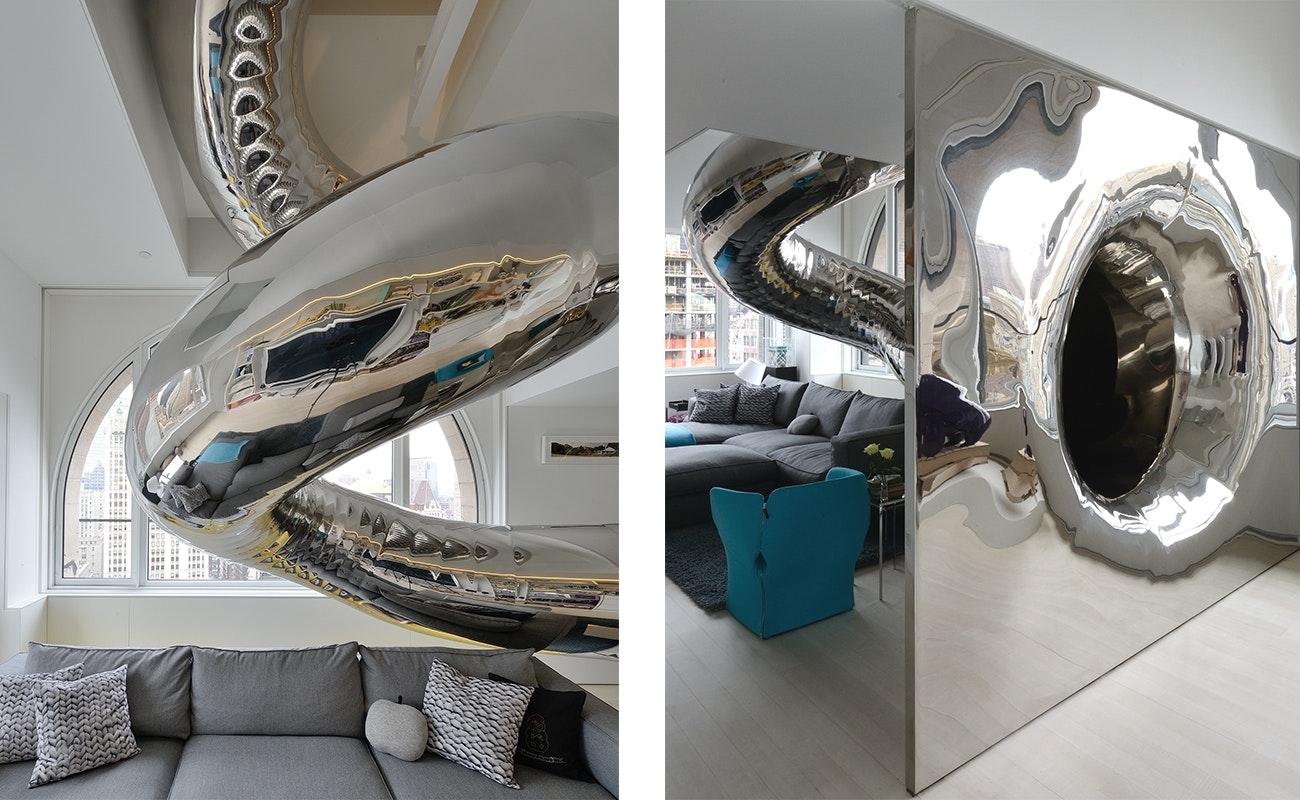 While photos of this architectural masterpiece simply don’t do the place justice, the following film does a fantastic job at giving viewers a greater sense of the enormity of this project as narrated by builder Josh Wiener of Silver Lining Interiors and Hotson himself. “It photographs beautifully, and the film elucidates it further,” he says, “But none of those is a substitute for the direct experience.” And if you happen to be in Manhattan you can do just that, with City Modern offering tours to the Sky House along with a bevvy of other impeccable New York homes. Be sure to let us know how the slide goes!

Our Showrooms are located in Sydney, Melbourne & Brisbane. Select your nearest location for address and trading hours.

A lot of luxury at a little price - Lounge Life brings you Australia's most exciting selection of leather lounges and home furniture. We design and produce furniture with a focus on style, comfort and price, without compromising on quality.

As an independent retailer, we need your support through these challenging times. We are managing the risks of COVID19 to ensure a safe environment for our staff and customers.

At this stage, all our showrooms remain open for business, but we’d like to assure you that the health and safety of our staff and customers is our highest priority.

We’ve taken all necessary precautions as advised by the government guidelines to ensure that everyone can stay safe – this includes frequent sanitisation and cleaning in showroom.

Home has never been so important. We’re here to help you choose the best sofa for you and your family.

We are following all updates to government advice closely. We are dedicated to your health and safety.

Thank you for your support and understanding.